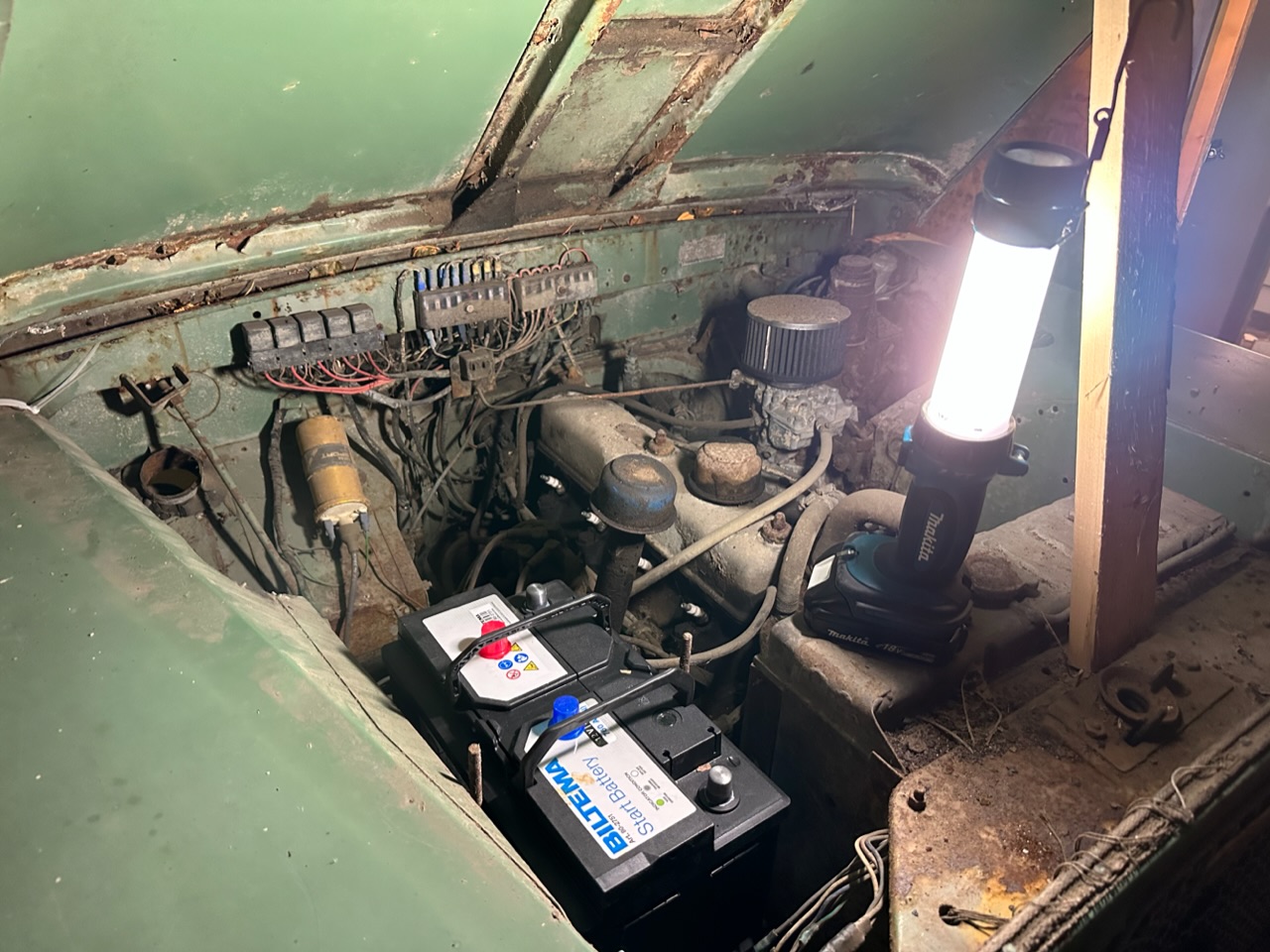 It’s great to hear the first sign of life as that starter whirls when activating Laura’s starter button.

While living in our temporary rented house, Laura has been stowed away in the houses tiny garage.
Nice and dry for storage, but with about 20 cm to any side, far too small to do anything serious work.

However, after searching for 18 months, we have found, and bought, our new permanent home on Zealand, and Laura will get a lot more space.

A friend will come with a trailer in a few days, so Laura had to be ready for transport. The last time she was moved we pulled her with a tow rope. This time I hope to run her outside by using her starter, so she can be pulled up onto the trailer.
Before doing that she will need a better tire, than her flat rear left tire, and a new battery.

Her old spare was not MOT worthy, but it’s sound enough to roll her out, and to pull her up on a trailer.

The original battery was only 58 Ah, but I have bought a battery box (that will be mounted later), and the largest battery that fitted in it. It’s 80 Ah, 30 percent more than an original.

The copper cables were very corroded, so the first attempts were not a success. After removing the corrosion with a wire brush it was possible to get a proper electric connection.

Lack of use has left it’s mark on the starter button, and it was frozen solid in the off position. After massaging it for a while, it became mobile again, and in the end worked as originally intended.

It was great to be able to oush the button, and hear the starter wake up, and turn the engine.

Laura is now ready to be moved. I look forward to seeing her parked in her new workshop.

29th March 202224th June 2022
Peter
What batteries do you get for your Series Land Rover? Land Rovers original part is a 58 Ah battery for 4 and 6 cylindre petrol...
28th March 202228th March 2022
Peter
The original Land Rover dynamo is (as the original battery) fine in an original Series vehicle, but if you add upgrades like a stereo with...
25th May 202128th March 2022
Peter
Laura is from way before the Cigar lighter plug was invented, but she did have a pair of 12V "Dash power sockets", in form of...
3rd July 20208th June 2021
Peter
Getting spare parts for some 50+ year old cars can be a nightmare. But unless it’s a very very early Series I, it’s not really...
4th June 202024th June 2022
Peter
Laura is a mature woman, and I can't see any reason to hide her age, and all her patina, and minor imperfections help tell the...
26th May 20202nd January 2022
Peter
I love LED lights. They are more durable, and have a much better and higher output of light, compared to the old incandescent bulbs. And...